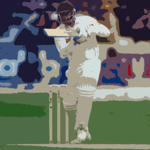 ​
You've got no idea who that player is have you? Well he, along with 93 other players, represented the England Cricket Team in the 1990s. And your job will be to pick an entire, incredibly mediocre cricket team out of this pile of cricketing odd socks. It's the draft @blockerdave was made for.

Okay so we'll do this with five people and just put up with the teams being slightly less dreadful.

I am happy to put together 2 sides...

blockerdave said:
I am happy to put together 2 sides...
Click to expand...

I mean same but still

We can always do a second XI draft afterwards? Would mean picking some uncapped county players as well but there are definitely plenty of those

First pick. Wow. Think of all the choices...

How could you not want this picture of an athlete in the side. I mean he was in peak physical condition during the 90s...

We can always do a second XI draft afterwards? Would mean picking some uncapped county players as well but there are definitely plenty of those
Click to expand...

Actually, if I were to open up the player criteria to include players who played between '88 and '01 there are some extra players who really embody the spirit of '90s England:

John Childs (88)
Nick Cook (89)
Richard Dawson (01)
Chris Schofield (00)
Obviously they'd not go into the original draft, but if we had a second XI draft they could find a place
Y

There isn't any argument against this pick...

There isn't any argument against this pick...

There’s one argument, you have to pick Graham Gooch first.

@Aislabie
You must log in or register to reply here.