0.2: Shot from Seymour! A classical cover drive all the way to the fence.
0.3: Square drive this time. A fencing exhibition from Seymour only seen in the past by Nadi.
0.4: Three in a row, but this one's lucky! Thick edge off another attempted drive just out of the reach of first slip.

1.3: Kann started well, but just misses this wide yorker, and Seymour gets underneath it and runs it to the backward point boundary.
1.6: Seymour's the real deal! This one goes three rows back just wide of the sightscreen.

2.1: Stumping appeal. McDermott looks unsure, Finch looks relatively untroubled.
2.3: Finch finally joins the party. Driven through extra cover from four.
2.5: Jordan Thompson with a superhuman effort in Vain. Finch skies it deep into mid wicket but he picks out Thompson's x and y coordinates. But the z is high, and he elevates a la Jake Fraser McGurk to try and prevent the six, failing by half the width of the rope. Outstanding drive.
2.6; Appeal! Hits Finch outside the line though.

3.2: WICKET! The schoolteacher finds a way! Seymour mows Rogers to the leg side and picks out Josh Kann at short mid wicket. 1/37
3.5: Off drive! Marsh gets his innings going with a lovely shot.

7.2: Close LBW appeal! Looks to possibly be out, but umpire's call is more likely.
7.3: Marsh takes advantage of the potential life! Steps down and slams Short to the cover fence.

9.2: Even more outrageous! Marsh swings at Kann andwhacks him for six over point! Renegades get the Boost point, effectively ending the slim chance Hobart had at that second place.
9.4: This time it's along the ground. Four more.
9.5: Another four through the same place! Marsh with real acceleration.
1/89 from 10. The Renegades are right in this, and the Stars are cheering them on for once!

10.3: Finch joins into the boundary at backward point club. Hurricanes quicks are suffering.
10.5: Four more, this time for Marsh. Hobart need a wicket now, while the equation is still RRR 9.
10.6: Through ordinary point now. Another big over.

11.1: Sweeps to the fence now, does Finch! The Cane Train is suffering from a lack of coal

12.4: Finch plays a princely shot straight down the ground! Sends it 100m and straight through a chair.

13.3: Finch flat bats Rogers back past himself to bring up his fifty! Lovely shot.

Surge taken to start the 15th. Sandeep back.
14.3: Marsh picks the gap between... just guess. It brings up his fifty.
14.5: WICKET! The Hurricanes needed that wicket, and with the RRR still around 9, they have a chance! Marsh chips it directly to one of the SIX men on the circle on the off side - David at point - and Hobart now has a sniff! 2/138
This brings Unmukt Chand to the wicket. Misses his firts ball, so an incredible Lamichhane over ends with four from it and a wicket to turn the game a bit. 2/138 from 15

Edit: Surge started in the 14th. So not a great surge there.
15.1: That's great though! Short is drilled over long on for six by Finch.
15.2: In the gap! Finch tried to replicate and chunked it, but dew helped it kick into the gap. Run rate goes from almost nine to 7.5 in two balls.

17.4: WICKET! It wasn't taken prettily by Jewell, but it was taken, and Chand is gone. We're headed for a grandstand finish, but Finch is still in...
17.6: Finch gets a four! Finds the gap between mid wicket and square leg yet again, and 18 off 12 is the equation!

18.4: WICKET! And has Aaron Finch just put a stake through his mortal enemies' season (Stars)? Goes for a big six, and picks Tim David on the fence. Hurricanes may be on their way to finals but not after a brilliant 75 from Finchy gave them a huge scare. 4/166
18.5: WICKET! The exact same method, but Merlo picks D'Arcy Short out at long off instead. 5/166, Rogers on a hattrick.
18.6: Hattrick ball averted. Harper gets two, meaning he and Sutherland have to score fifteen from the final over to save the Stars' season.

19.5: Four but is it too late? Sutherland plays it nicely back past the bowler. A six will tie the game; a wide/nb and a six will win it. What does Sutherland do? What does Meredith do?
19.6: STRAIGHT UP IN THE AIR AND TAKEN BY WADE! THE MELBOURNE STARS ARE ELIMINATED BY A PREDICTABLE COLLAPSE BY THEIR CROSS TOWN RIVALS! The final score is 6/176. Highest of the season for them as far as I'm aware but not enough. Hobart's seam bowling was crap until the power surge, and then it suddenly became good thanks to Tom Rogers and Riley Meredith tightening up their lines - and also probably Josh Kann not bowling again. So Scott Boland will be back for more than one match, which will hugely strengthen Hobart. Finch is unusually given POTM - probably the result of the Canes' team effort.

Doubleheader tomorrow night! Actually a tripleheader but I'm 1) busy and 2) not televised for the first game, Heat-Sixers. No consequences for the Heat, other than possibly confirming they avoid last, but Sixers are playing for the chance to be second on the ladder. I'll run through the other permutations tomorrow. Night.
U

Gades went from winning the BBL to a hattrick of Wooden Spoon! LMAO xD

Umair7 said:
Gades went from winning the BBL to a hattrick of Wooden Spoon! LMAO xD
Click to expand...

What happened is they lost their coach, they hired Michael Klinger who was crap, and as I've seen as a Heat fan, toxic culture in terms of on-field performance is hard to change

The Heat's best performing employee is shining through again here: 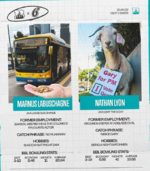 ddrap14 said:
What happened is they lost their coach, they hired Michael Klinger who was crap, and as I've seen as a Heat fan, toxic culture in terms of on-field performance is hard to change
Click to expand...

Gades have no plan, no tactics, just vibes right now! Marsh, Finch & Kanos arent getting young either! Youngsters have been disappointing! Unreal Downfall!

Seems like you have bold plus italic automatically turned on

Hasnain is playing international cricket since almost 3 years, in an era where bowling actions are closely scrutinised, but he gets reported after a few matches in the BBL, right after Moises Henriques accuses him of chucking mid-match

CerealKiller said:
Hasnain is playing international cricket since almost 3 years, in an era where bowling actions are closely scrutinised, but he gets reported after a few matches in the BBL, right after Moises Henriques accuses him of chucking mid-match

Aussies always do this after struggling against a foreign player. Either they misbehave or they accuse of chucking

Live blog will begin at the halfway stage f the THU_REN match.

Cam Boyce is scorching the THunder

Well. The Renegades are chasing 171, but anywhere between that and (score still to be determined), both sides will feel like they have lost as the Thunder won't make the Qualifier.

0.2: WICKET! The Thunder with the perfect start! Seymour pulls hard, and picks out deep square leg! 1/2

1.5: Four straight back past the bowler! Lovely by Marsh.

6.5: Dropped for six! Chris Green can't hang on to one he'd have had to take a metre abvove his head, and drops it onto the rope too.

7.4: WICKET! The catch is finally taken, and Marsh gone. Skies one to long off. Is this just a sniff for the Thunder? 2/61

2/77 from 10. The Thunder need a Boyce-esque team performance to jump Sixers now
You must log in or register to reply here.

D
Story If Your A Stats Track Mac, Get Your Kicks Here!!
2 3