This is a league where a 3 Test,5 ODI & 1 T20 Series will be played between all the rival countries. There will be 2 or more series going on same time and each season will see winners among different Trophies that are named in the years gone by.

The Basil D'Oliveira Trophy is a trophy played for by England and South Africa in the sport of cricket. The trophy is awarded to the team that wins a Test series between the two nations. If the series is a draw, the holder keeps the trophy.
The trophy is named for Basil D'Oliveira, a South African born English Test cricketer whose inclusion in the English squad to tour South Africa in 1968-69 led to the cancellation of the tour following objections from South African authorities due to D'Oliveira's classification as "coloured".
Click to expand... The Wisden Trophy is awarded to the winner of the Test cricket series played between England and the West Indies. It was first awarded in 1963 to commemorate the hundredth edition of Wisden Cricketers' Almanack. Series are played in accordance with the International Cricket Council's future tours programme, with varying lengths of time between tours. If a series is drawn then the country holding the Wisden Trophy retains it.
Click to expand...

The Trans Tasman Trophy is a trophy played for by Australia and New Zealand in the sport of cricket. The trophy is awarded to the team that wins a Test series, or one-off Test match, between the two nations. If the series is a draw, the holder keeps the trophy. It was first competed for in the 1985–86 season.
Click to expand...

The Warne-Muralidaran Trophy is awarded to the winner of the Australia - Sri Lanka Test cricket series from 2007/08 season onwards. The trophy is named after the two leading wicket takers in Test cricket, Sri Lanka's Muttiah Muralitharan (who prefers to romanise his name as "Muralidaran") and Australia's Shane Warne.
Click to expand... 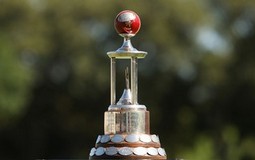 The Frank Worrell Trophy is awarded for the winner of the West Indies - Australia Test match series in cricket.
The trophy is named after the former West Indies captain Sir Frank Worrell, and was first awarded at the end of the 1960-61 series. The cricket Board of Control and Sir Donald Bradman commissioned former Test cricketer and professional jeweller Ernie McCormick to create a perpetual trophy. The trophy was to be presented to the winning captain of each Test series between Australia and the West Indies.
Click to expand...

The Border–Gavaskar Trophy is a Test cricket series, played between India and Australia. It has witnessed some of the most competitive Test series played in recent years, with results usually either being a narrow win for one of the sides or a closely-fought draw. It is currently played via the International Cricket Council's future tours program, with varying lengths of time between matches. If the series is drawn, then the country holding the trophy retains it.
Click to expand...

There is no points system, its just rivalry

india for me, want to beat pakistan badly

The Ashes is a Test cricket series played between England and Australia. It is one of the most celebrated rivalries in international cricket and dates back to 1882. It is currently played biennially, alternately in the United Kingdom and Australia. Cricket being a summer sport, and the venues being in opposite hemispheres, the break between series alternates between 18 and 30 months. A series of "The Ashes" comprises five Test matches, two innings per match, under the regular rules for Test match cricket. If a series is drawn then the country already holding the Ashes retains them.
Click to expand...

South Africa for me. Good luck with this league

The Indian and Pakistani cricket teams have been long-time arch rivals and their rivalry is considered one of the most intense sports rivalries in the world[2][3] An India-Pakistan cricket match has been estimated to attract up to one hundred million television viewers according to well respected TV ratings firm Initiative, and defeat is usually unacceptable to fans of both teams.
Click to expand...

australia for me ok

The idea is really fantastic. Go ahead! Hope you complete this successfully.

England for me. Would like beating the mighty Aussies.
Last edited: Jun 21, 2011

why are you not sure of me

i will be active and be produce good results

Pakistan For me as India has been Picked