Crawley, it’s hero or zero with him. More zero then hero.

Mayers really working Root over here. Going to be hard for England, will need lower order heroics again, preferably not from their #10 and #11 this time though

Could be done tonight. Be a shame to have to come back in the AM

That's an absolutely elite set of bowling figures, and it's further proof (as if any were needed) that England have been missing a huge trick with their continued non-selection of Darren Stevens

That's an absolutely elite set of bowling figures, and it's further proof (as if any were needed) that England have been missing a huge trick with their continued non-selection of Darren Stevens
Click to expand...

Man literally couldn't be any worse than what we've got now

Time for another effortpost I guess, but most of the headlines aren't really headlines.

England are awful at Test cricket? Heard that one before. Joe Root the captain is an absolute lettuce of a leadership figure! Change the record. Young spinners are managed worse than the average HR training department! Obviously. There is not a single visibly obvious Test opener in all of English cricket! Where have you been since 2014?

From here I see three essential steps that have to be made, and three options that England have to choose between.

The Essentials:
These are non-negotiable now. It's come too far to be able to avoid them. The remainder of this is more interesting.

The Options
Of those three, I'd be *inclined* towards Option 2, built around some of Yates, Crawley, Lawrence, SCurran, Mahmood, Carse and Parkinson. It's not easy though because it guarantees a tough transition period.

We are watching, in Woakes & Leach, 2 batsmen better equipped to open the batting than anyone who has played there since Strauss & Cook.
Q

Wow what a match this for the WI! England test team seems to have gone really bad over the years.

Resting your best bowlers and persisting with Root as captain are the biggest mistakes England seem to be doing right now. There's the issue of not having quality batsmen as well, but they first need to address these two.

But still, I would expect them to win the one-off Test against India later this year.
U 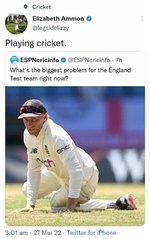 Post the Ashes, there were three things right with English cricket and probably not much more-

They changed all that and nothing else. Mind numbing things the poms can pull off.

I will never for the life of me understand why they play Woakes as a specialist test bowler anywhere but England. It just boggles my cricket brain no end.
You must log in or register to reply here.