What a day to pick him

Can't believe he's 38 already. Hopefully he gets a chance to get his 700th.

With Murali long gone, it is a bit of a surprise that the next best finger spinner and arguably the pioneer of the doosra in Saqlain Mushtaq still remains unpicked. Doosra? Arm ball? Teesra? Chotha? With Mushtaq you never knew what was coming and the man terrorized batsmen when spinners were still seen as a bit of a joke in ODIs. A cursory glance at the other spinners of the day reveals just how far ahead he was of his competitors with Murali being the only giant that could stand besides him. I‘m not even kidding, between 1990 and 2005 only three spinners averaged 25 or less (the same count for pacers would be in double figures) and multiple regulars and arguably stars would average in the 30s. His influence on spin has been far reaching with multiple greats in their own right such as Ashwin, Harbhajan, Narine, Ajmal taking inspiration from him and his fearless attitude.

Despite having a rather modest end to his career due to mismanagement, both self and team inflicted his overall figures remain legendary and all of this was in an era where spinners were supposed to just get through their overs and try to be economical. Imagine Mushtaq in the modern era with an aggressive captain backing him to take wickets and batsmen looking to attack him. He would be unstoppable with his trickery and cleverness. Another impressive thing about Mushtaq is that he is no bunny with the bat, having a test century to his name. Despite not being a slogger, he can certainly hang around and stay for more than a few deliveries should a marauding batsman at the other end need it.

My next pick is ANDY FLOWER. 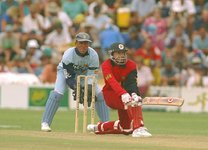 If you ask me about the best player ever played in Zimbabwe jersey, I will everytime reply Andy Flower. For a period of about two years from the start of 2000 he was so phenomenally consistent that he has no rival as the best player in Zimbabwe's history. He had many roles to fulfill, but he fulfilled all of them in best possible manner. One of the best players of spin, his control over the reverse sweeps left the bowlers dumb founded. Andy debuted against Sri Lanka in the 1992 WC and made history by scoring a century on debut. Not only a sublime batsman, but he was a solid wicket keeper too.

Moreover, Andy Flower will be counted as an associate pick as he debuted for Zimbabwe in Feb 1992 while Zimbabwe was granted Test status by the ICC in July 1992 and played its first Test match in October that year.

So my next pick will be Shane Watson. He contributed both with bat and ball. Also he provides flexibility in the lineup.

This is a huge pick, especially as one of your two associates

Flower was on my radar but I had no idea that he would count as an associate. Oh dear.
Y

@Aislabie can pick now I Guess. 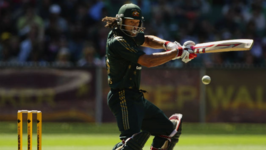 A pretty easy pick here; I've gone for somebody who was one of cricket's biggest hitters, as well as an all-time great fielder and an excellent utility bowler. While he may not end up bowling a huge amount in this team, that doesn't really bother me too much - his jobs are to hit sixes and catch/run batsmen out. It remains to be seen whether he will end up shuffling down to number six (and Procter to seven) to make room for somebody who I'm looking at as a round seven or eight pick. Pollock, Symonds and Procter is an absolute powerhouse middle order though.

After 33 players and 11 days, i get to pick again and after this I have to wait another full round before getting a double pick. So have to fill in an important player here.

Cant believe 66 players have been picked till now and Brian Lara doesn't feature in that list. He was ranked as the #1 ODI Batsmen in the ICC rankings for 2104 days in his career. He will bat at 3 for now.

Neptune said:
After 33 players and 11 days, i get to pick again and after this I have to wait another full round before getting a double pick. So have to fill in an important player here.

Cant believe 66 players have been picked till now and Brian Lara doesn't feature in that list. He was ranked as the #1 ODI Batsmen in the ICC rankings for 2104 days in his career. He will bat at 3 for now. 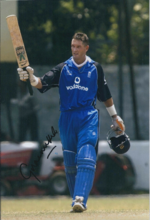 So this is a pretty left-field pick, but Graeme Hick is one of the most underrated limited-overs batsmen in the history of the format. A huge presence at the crease, he was capable of playing all kinds of roles: for England, that was often the role of "only wicket not to fall in a collapse", resulting in an extremely impressive average of 44.53 in ODI 58 innings at number three. For Worcestershire however, he had the freedom to be more expansive: especially in the nascent Twenty20 format. Despite being a 38-year-old, and allegedly past his peak when the format was introduced, Hick utterly dominated. His 1,201 Twenty20 runs came at an average of 36.39, with two centuries and a strike rate of 156. In this team, with all the batting that comes after him, Hick will be able to fully express himself.

He also has two other upsides. The first is his bowling: he was as good a part-time offie as you could wish to find. The second is that he played 21 first-class and 30 List A matches for Zimbabwe before moving to England, and therefore counts as an Associate player.

@Murtaza96 - you have two picks, as one of them is a late pick.
@Parth D are you back regularly now, or would you still like to be listed as skippable in the draft order?

Aislabie said:
@Parth D are you back regularly now, or would you still like to be listed as skippable in the draft order?
Click to expand...

Best guess will be to allow the person next to me to immediately make his pick and not wait for me for 24 long hours. No sense to keep everyone waiting and elongate the draft, in case I can't make through.
You must log in or register to reply here.

Draft: The Alphabet Draft 3 - Revenge of the Consonants
7 8 9