I watched him play in all three formats at Northants until about 2008 or so (part of the Wessels influx), so no. Plus he has 53 T20 matches to his name

Aislabie said:
Of course! And although he did appear in five Twenty20 matches, they came on a short Hampshire stint after he'd already retired from everything else so I'll rule him as a pre-Twenty20 player
Click to expand...

I didn’t pick him because he played T20s 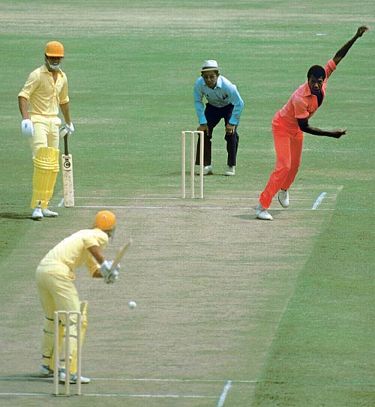 It's about time I picked myself an elite fast bowler, and I've picked the man who is head and shoulders above any other one-day bowler. The argument that he played in a different era (which he did) and that batsmen weren't as versatile (which they weren't) is still irrelevant, because his VARP of +98.26% puts him into the absolute top tier of one-day international bowlers, of any kind, of any time. Doesn't matter how good you are, you aren't hitting Big Bird's yorkers for six.

@mohsin7827 - If you want to change your Klusener pick owing to him not being a pre-Twenty20 player, please feel free

Thanks @Aislabie Yes I am changing my pick.My two next pick are
Imran Khan
Among the quartet of all-rounders (Botham, Hadlee, Kapil Dev, and Imran) and The leader of men

Will take Suresh Raina who definitely has been one of the best Indians in the history of the IPL.
He has a t20i century too and was brutal on his day. In the 2014 IPL, the highest powerplay score by a team was 86. In a playoff match, Suresh Raina made 87 off his own bat in the powerplay before tragically getting run out

Goodness me, I had three targets in Garner, Bumrah and Raina. I come here and I find them all gone.

With three of my primary targets no longer available, I will have to go instead for the last remaining world-class domestic bow ling all-rounder left in Amar Singh. I don't think I can do him any more justice than in my post in another draft (highly recommended read to know why he should still be regarded as a top three Indian pacer until the current pacers retire at the very least). Safe to say though, think of him as having the bowling ability of a Bhuvi with the ability to hit 140 kph easily and manipulate the seam masterfully or swing it well besides being a bowler who preferred to be accurate rather than leak runs in pursuit of wickets with a set field and bowling plan, something that suits the captain of my side. With the bat he had the ability of a Hardik Pandya to hit sixes without caution, frequently risking his wicket too. What can be called as inconsistency in the longer formats will be a boon in the shorter one as he is unlikely to consume many balls and he will often hit a few boundaries before being dismissed. If all of this does not convince you how about the fact that he was a star in the Lancashire Leagues, the proto-IPL of those days? His experience there in the shorter format of his day will bode well in this team.

At the moment I've pencilled him in at seven in my side, but do not be surprised if Dhoni chooses to promote this hard hitting all-rounder ahead of everyone at the start of the death overs to get some quick runs and pulverize the bowlers. A batsman who was utilized as a pinch-hitter in his prime with plenty of single innings' experience and a bowler who was remarked to be one of the best in his era in the same player as a domestic option at the cost of a pre-T20 spot too, what is not to like?

Dammit, I was confident that he'd make it until considerably later in the draft than he has

Aislabie said:
Dammit, I was confident that he'd make it until considerably later in the draft than he has
Click to expand...

Thought of taking the same risk but a lack of quality alternatives to the role he plays made me worried.

@The Real Modi can go ahead