yashwanth kumar said:
Good updates mate BTW Srilanka could have done much better with the ball , may be a last over win for NZ would have been better in there point of view

The spectators are extremely angry for the match being a boring one.

.
BTW, why don't you add up logos on those images?
Click to expand...

I've decided to keep the updates simple and effective.
I don't wish to spend much times on collecting logos, statistics, etc.

Then how're you gonna add up all stats to decide the Man of the series?

Binnu said:
Then how're you gonna add up all stats to decide the Man of the series?
Click to expand...

I mean, the collection of real life statistics, the actual ones.

Yudi said:
The spectators are extremely angry for the match being a boring one.

Hope Security is tight enough , Cops look trough he is safe thought the tournament , and Keep a tight security check in the hotel

And any chance of PM me the PSD files

Good start, hope you finish this one !

Good Luck with this !

Hope Security is tight enough , Cops look trough he is safe thought the tournament , and Keep a tight security check in the hotel

And any chance of PM me the PSD files

Chanderpaul's half century guides Windies to a victory.

The West Indian crowd was waiting in anticipation to see their home side play their first match in the T20 WC. The stadium was packed, no empty seat could be seen. Ireland won the toss and elected to field first. The flamboyant captain of the Windies, Chris Gayle came to open along with Fletcher. The both provided a nice T20 start to their side. When Fletcher departed, one would have imagined that Gayle would now take off while Chanderpaul would just look to play the 20 overs. But, it was quite the opposite. Chanderpaul took on the Irish bowlers from the first delivery, scoring a quickfire 59*.

The Irishmen had to chase a target of 149. At one stage, one would have thought that they would win it, but N. O'Brien suddenly went too slow the innings was the pace of the innings got retarded. The skipper Porterfield couldn't contribute much with the bat, but Stirling was at his sublime best. The positives for Ireland from this match was that they just lost two wickets in the alloted 20 overs. Jerome Tayler was simply superb conceeding only 9 runs in 4 overs along with the crucial wicket of the Irish leader, W. Porterfield.

You are going too fast go slow...

Aussie Team said:
You are going too fast go slow...

I'll be going inactive from tomorrow to Sunday, so, though of giving some quick updates!

We can wait if you go inactive!!!

No such presentation.. Seriously speaking A Series Championship League has a better presentation then this!!

I don't quite understand why you cannot put some effort into such a wonderful tournament? This could well be the most amazing stories if it is done properly. It's a T20 World Cup story. There is such a huge build up to this. But, here we don't even know the squads and 2 matches are done with.

Posted via Mobile Device
If one doesn't knows the squad, then its a shame as they are same as the actual ones.

@rahul: Summary and a scorecard. Tally on the index! What else do you need?
I am sure that you (rahul) wont be reading the summary too. Also posting the ball by ball commentary will be waste as nobody takes the trouble to read the commentary, which is understandable.


Yuvraj was really disappointing in the IPL 2010. There are questions on his form and fitness. Its certain that he'd like to make a storming comeback, and who could be the better opponents than Afghanistan! Expect some big hits from Yuvi.​


Not many know much about the Afghani team. Nowroz Mangal, the skipper of Afghanistan would surely by ready for the opportunity of a lifetime. He proved to be an extremely influential leader of Afghanistan in the WC Qualifiers. One could hope that Mangal continues the good work.​


An all - round performance guides India to an easy victory. Jadeja gets the MOM award.


It was the debut of the Afghanis. Their captain Nowroz Mangal won the toss and elected to bat first. Noor Ali and K. Sadiq came out to open the innings. The start wasn't good as Afghanistan lost two wickets on 9. But then, there was some relief for them, provided by Shahzad and Mangal. They both added 41 runs before Mangal departed. A lot was expected from Nabi and Stanikzai but they got out cheaply too. It was a superb bowling performance from India dismissing Afghanistan for just 76. Thanks to Zaheer Khan and Ravindra Jadeja for the brilliant bowling performances.

India had to chase a small target of 77. Gautam Gambhir came out to open with Murali Vijay. Vijay, the replacement of the injured Virender Sehwag didn't trouble the scores much, getting adjudged LBW off Zadran on just 7. Once he departed, Suresh Raina entered but he too couldn't do much. The timber rattled he was gone, just for 6. Mr. Dependable Gautam Gambhir was still there on the crease. Yuvraj Singh was in his same old fashion, whacking the ball all round the park. One might say that he is returning to form, but we'll have to see what he does against South Africa and in the super 8s, if India qualifies for it. The positives for the young Afghani team would be the superb bowling performance coming through from Zadran.​

Man of the Match: Ravindra Jadeja 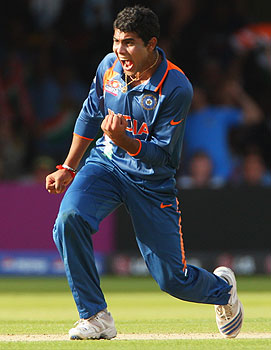