A news I didn't want to hear waking up, but yeah it's the right call.

AliB said:
A news I didn't want to hear waking up, but yeah it's the right call.
Click to expand...

(To Compensate for our loss)

AsadRM said:
Unfortunate to see the IPL postponed. RCB was on top for the first time in a long time but destiny had other plans.

Serious question marks over the WT20 now...
Click to expand...

I blame Hyderabad for this

Mohsin Khan is the part of MI setup since 2018. But, he didn't play any matches for them till date. It's very shocking! Kulkarni is the past, Mohsin is the future. Boult needs rest.

TheJoker. said:
(To Compensate for our loss)

She was spewing nothing but absolute hate and extreme level of diabolical bullcrap of nonsense from that social media account.

Great to hear some positive news in the midst of what feels like a never ending Pandemic.
Last edited: May 4, 2021

AsadRM said:
Unfortunate to see the IPL postponed. RCB was on top for the first time in a long time but destiny had other plans.

Serious question marks over the WT20 now...
Click to expand...

As I said before, hell with the RCB, IPL and even AB. We have been saying for a while that this shouldn't be happening. Life > Sport.

Can you imagine being one of the family members of the players? People in our country, very young, very fit are dying and these guys are out being a part of child's play. Think of someone like AB's wife who has three very young children. It was madness.

Even when things were at a low in India, I had said it should happen in the UAE. We Indians have no sense of discipline and patience.

Seems mad it's come to this when a few months ago India had fans in grounds against England. Crazy how quickly things can escalate.

CerealKiller said:
Could’ve hosted it in the UAE again. Is the weather that different in April/May and September? @Velocity
Click to expand...

The weather's pretty similar in April and September. July and August is at its peak in terms of temperature, September is when it slowly tapers off and April/May is when it starts to go up around the 35c mark. Pretty similar weather to India if not only a few degrees higher.

If anything, the UAE was by far the safest option to hold the IPL, and is the safest option in Asia to host the WT20. Over 60% of people have been vaccinated, the positivity rate is just below 1% (in terms of positive cases per total daily number of tests), a lot safer conditions than the last IPL held in the UAE. But for whatever reason, egos prevailed over common sense and the inevitable breach of the bubble by Covid has finally come. Just a slap in the face to the higher ups that thought playing a large tournament in a country struggling with Covid would do any good than making that money. This IPL has exposed the ignorant side of the BCCI, and the political aura that rises over that top threshold of power. They were way too lax on most things Covid related, ever since the first game in India during Covid times with the large crowds with no mask wearing.

Will be interested to see when and where the tournament will still go on. It will take a lot to bring all those resources to the UAE which they can't do currently because of the travel ban between India to UAE, plus there's a chance it could clash with the PSL, who are looking using the UAE to finish their tournament as well. The only bracket(s) available would be July/August, where the weather gets extremely hot, or after the WT20, where there would be a clash with the Australian/NZ summer or a small bracket between August and September which would still be very hot.

Ed Smith's Basement said:
Seems mad it's come to this when a few months ago India had fans in grounds against England. Crazy how quickly things can escalate.
Click to expand... 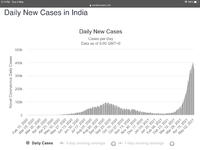 And these are official figures which have been massively under reported

abhi_jacko said:
And these are official figures which have been massively under reported
Click to expand...

Finally some sense prevailed to cancel the league. I for one was excited about IPL happening again when the English tests were going on but things changed drastically. We really need all round better leadership. We need better leaders leading the country, we need better oppositions holding the ruling party and we need young people to step up.

I will miss the IPL! My connect with international cricket has been on a serious wane in the past few years and IPL was that strong connect that kept my passion alive for the sport. I dont follow any other sport (used to watch tennis once upon a time; more than a decade back but dont anymore). For a guy having lived in the US for 20 years now, I never connected with the sports that the locals follow here.

Anyways... whatever has to happen, has to happen! I personally wish they dont try to restart this season and just start fresh next year. There will be financial repercussions and I just hope the BCCI can take it on, because when things return to normal, cricket will still be crazily followed in India and this league will still be the most valuable league to play in for international players (because of the audience they can reach out to)
You must log in or register to reply here.