I am starting a new project with Owzat Games International Cricket and the IC Excel Helper, an alternative cricket history starting in October 1980/1 and progressing as far into the future as I can manage.
I chose 1980/1 because I really like the players around then, I saw a lot of them play on tours of Australia in the 1980's and read a lot about the overseas matches in Wisden as I was growing up.
I will be sticking to the existing schedule as much as possible, but adding tours here and there so each team has at least 2 home and 2 away series per year.
I will be adding ODIs to each tour and also T20s because I would love to see how someone like Viv Richards goes in T20 cricket.
A player's Test card will be used for white ball matches, I don't mind that stats aren't official.
I will creating players for Tour matches based on stats achieved in Tour matches and Tests and also extra Test and ODI players using the Player Generator.
I will be using my own selections for matches, with the injury rules from the Welcome Back to the West Indies set adding a random element to selection.
Pitches, Weather and Form will play an important part in selections, with players rewarded for doing well in the replay.
I will be using the Enhanced New Ball Rules, Ground Specific Weather Conditions, and ignoring in game injuries (too annoying with a 5 man attack).
The schedule for the first year or so has been mostly worked out, sticking to the original schedule as much as possible, with some Tour matches featuring Test players added.
I might add some ODI and T20 tournaments here and there if gaps in the schedule open up, but the Test schedule is set for the 1st season.
I might also add some A tours and Youth cricket, and maybe some domestic cricket using Test players if I have space in the schedule.
Sri Lanka will gain Test status a year early with active First Class players in 1980/1 allowed to participate.
South Africa and Zimbabwe will gain Test status around 1985/6 with 90's Test players who were active at First Class level at that time filling their squads.
I may fill in the gaps in my database for previous years if I feel like some variety with older players but for now I am sticking with 1980/1. 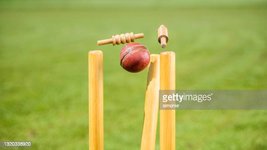 New Zealand tour Sri Lanka in October 1980/1 for 3 Tests, 5 ODIs, and 5T20Is.
Sri Lanka will be making their debut in International matches a year early for this replay with the 11 Test players active at First Class level in 1980/1 filling their squad.
New Zealand have a strong squad in 1980/1 after beating West Indies in a Test series at Home earlier in the year and start as heavy favourites.
Sri Lanka hope to spring a surprise or two and with Home conditions heavily in favour of spin it should bring their support spinners into the game.
The visitors look strongest in bowling with their attack lead by fast bowler Richard Hadlee, and spinners Stephen Boock and John Bracewell set to play a big role.
A slight weakness in batting may be the tourists achilles heel, something the Sri Lankans will hope to exploit during the series. 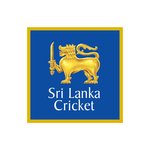 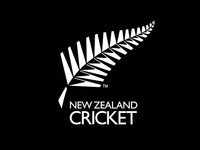 The Sinhalese Sports Club hosts the 1st International match in it's history on 1st October, 1980, as Sri Lanka face New Zealand in the 1st Test.
New Zealand have some injury problems going into this match, something that could play into the Sri Lankans hands on a pitch that should assist spin.
Captain Geoff Howarth, batsman John Parker, and pace spearhead Richard Hadlee all miss this game for New Zealand, with Hadlee's loss by far the most serious, a cracked rib forcing the allrounder to miss the first 2 Tests.
With the pitch possibly Taking Spin late in the match New Zealand have chosen both spinners, with Ewan Chatfield and Gary Troup taking the New Ball.
New Zealand start as favourites, but the injuries could make the match closer, particularly if the tourists are forced to bat last on a turning pitch.
The decision to leave out experienced batsman Glenn Turner may come back bite the tourists but the top 3 look to be pretty solid players in any case.
Some Humid weather aiding Swing will make the seamers dangerous on the 1st Day, but with the pitch heavily favouring spin late in the match it looks to be a bat first wicket.

Pitch: (pre 1988) - (7A,3,8A,8) - Nicely-prepared strip with the prospect of an evenly-balanced contest between batsman and bowler. Some early pace in the pitch may make winning the toss a mixed blessing, but the pitch is certainly likely to favour the spinners on the final day.
Day 1 Starting Pitch: 7A - Fast Paced Wicket
Day 1 Weather: 1 - Hot and Humid
Injuries: G.P.Howarth (ankle injury - 1 match), J.M.Parker (stomach bug - 1 match), R.J.Hadlee (cracked rib - 2 matches) 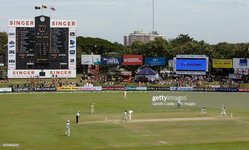 Sri Lanka won the Toss and batted first hoping for the pitch to favour spin on Day 4 and 5 despite the Humid conditions aiding Swing.
In a spectacular start to their Test history, Sri Lanka lost opener Sidath Wettimuny to a superb yorker from fast medium bowler Ewan Chatfield to the 1st ball of the match.
When captain Bandula Warnapura also fell 1st ball Sri Lanka had made the worst possible start and with 4 of the first 5 batsmen falling to Yorkers from the New Ball bowlers the home side were in disarray.
Middle order batsman Ranjan made a brave 37 but with all 5 of the New Zealand bowlers chipping in they were all out for a palty 84 halfway through Day 1.
Left arm fast medium bowler Gary Troup used his Swing and Yorker to good effect to take 4-32 and with Ewan Chatfield and medium pacer Coney chipping in with 2 wickets each the injured Richard Hadlee was barely missed.
After being dismissed so cheaply the only plus for Sri Lanka is conditions remain Humid for the remainder of the day, possibly allowing their opening bowlers to grab some early wickets. 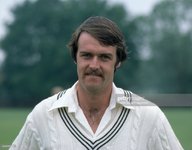 Sri Lankan offspinner Lalith Kaluperuma claimed one of the more amazing 5 wicket hauls off just 8 overs as New Zealand's lead was kept to just 44.
New Zealand were all out for 128 on a blameless pitch, as Kaluperuma found Turn regularly to run through the middle order and tail after opening bowler Asantha de Mel had taken 3 early wickets.
John Wright looked in good touch for New Zealand before being run out by Duleep Mendis for 31 and that seemed to be the turning point.
With the pitch still Normal and weather on the 2nd day Hot and Sunny, Sri Lanka have a good chance to build a decent lead. 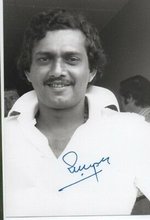 After trailing by 44 on the 1st innings, the Sri Lankans batted better 2nd time round, eventually setting New Zealand a target of 241 to win.
Keeper Mahes Goonatilleke was unlucky to be left stranded in the 90s, not out on 92* after over 4 hours of resistance.
Left arm spinner Stephen Boock was the best of the visitors bowlers with 4-77 off 37 accurate overs. 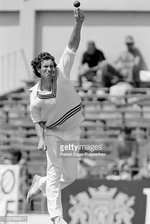 An excellent century to John Wright and an unbeaten 76* to stand in Number 3 John Reid carried New Zealand to a comfortable 8 wicket win.
The pair added 195 for the 2nd wicket to set up the win with Wright named Man of the Match. 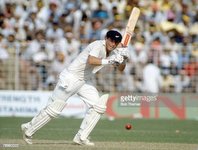 Pitch: (pre 1988) - 66 - (7A,3,8A) - Nicely-prepared strip with the promise of an evenly-balanced contest between bat and ball.
Some early pace in the wicket may make winning the Toss a mixed blessing, but the wicket is certainly likely to favour the spinners on the final day.
Weather: 1,2,2,3
Toss: Sri Lanka
New Zealand won by 8 wickets
Man of the Match: J.G.Wright
New Zealand lead the 3 match Test series 1-0 with 2 to play 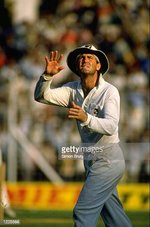 John Wright was named Man of the Match

New Zealand make some changes to their XI for the 2nd Test with the fit again Geoff Howarth and John Parker restored to the lineup.
John Reid is unlucky to miss out for the Kiwis after scoring an unbeaten 76* in the 1st Test with captain Howarth taking his place at Number 3.
New Zealand have left out offspinner John Bracewell and played the extra seamer in Lance Cairns in view of the Green Wicket with Cairns swing also valuable if the pitch flattens out.
Right arm fast medium bowler Martin Snedden makes his Test debut for New Zealand as he replaces Ewan Chatfield, Richard Hadlee missing out again as he recovers from a cracked rib.

Pitch: (pre 1988) - 81 - A combination of high moisture in the top surface, and a bone hard layer underneath, makes this a difficult pitch to read.
The pitch will probably help the seamers on the first day and thereafter play easily until it begins to wear late in the game when the spinners could find it very much to their liking.
Day 1 Starting Pitch: 6 - Green Wicket
Day 1 Weather: 3 - Sunny, some cloud about
Injuries: R.J.Hadlee (cracked rib - 1 match) 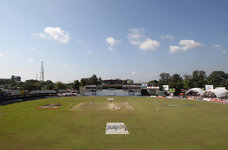 After losing the Toss and being sent in on a Green Wicket the Sri Lankans struggled to a 1st innings total of 214 all out.
New Zealand captain Geoff Howarth kept his seamers on for the entire innings, with left arm spinner Stephen Boock not bowling at all.
Left arm fast medium bowler Gary Troup continued his good form with 4 wickets while medium pacer Lance Cairns justified his inclusion ahead of a second spinner with 4-43.
Allrounder Somachandra de Silva was the home side's only real resistance with an unbeaten 78* in just over 4 hours. 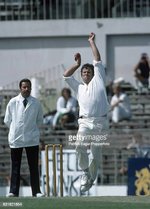 Lance Cairns took 4-43 with his medium pace
You must log in or register to reply here.